For years as a financial adviser I have recommended to people not to borrow from their 401(K)’s and other retirement plans. However, as this Great Recession lumbers on, which I know has passed, but many people are still suffering from its effects, the number of people who are borrowing from their 401K is growing. The effects of which will not be felt by the borrowers for years to come. Here are t 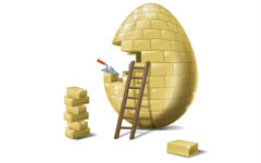 When borrowing from one’s 401K many people don’t consider it a “real loan”. After all, they are borrowing from themselves, right? Yes you may be borrowing from yourself, but it’s the wrong attitude. It is a real loan and must be paid back or penalties will be incurred.  Those penalties are very costly.
The penalties on the unpaid loan balance are income taxes and a 10 percent penalty tax (if you are under 59 ½ ). If you are in the 28% tax bracket, and your unpaid loan is $20,000 that means the cost of not paying back the loan will be approximately $7,600 or 38 percent – this does not include any state income taxes that may be due. If you are in California the amount could easily reach 50 percent or more in combined taxes and penalties.
You may say, "I am one of the 96 percent of borrowers as reported by Fidelity who pay the loan back faithfully, so what is the problem then"? Those who borrow typically reduce their 401K contributions during the years that the loan is being repaid – so they are saving less. If the loan is paid back over
the typical three years this lower savings rate has an impact on long term retirement savings. If the savings reduction is only two percent for three years for a 40 year old person that can be a cumulative loss of thousands of dollars at age 65.

Job cuts can cause you to either pay the loan back within 60 days or it becomes a distribution, subject to the taxes and penalties. This is especially hard when people have lost their jobs and are required to pay extra taxes on what is now income they were not expecting (Distributions are considered income). Or they are required to pay back a loan of any size in 60 days, chances are if they could do that they would not have borrowed the money in the first place.

Some employers, to discourage borrowing, charge loan fees, thus increasing the cost of the loan. Or employers are only allowing one loan at a time and after the loan is paid back they have a six month waiting period to borrow again. Employers are getting wise to the problems of borrowing, so they are limiting loan amounts to only employee contributions – thus keeping their contributions off the table.
There is also a trend that Fidelity has noticed, serial borrowing. Constantly going back to the 401K to borrow money is much a kin to keeping balances on your credit cards. This can be especially bad when trying to develop retirement security. This is what the government does, borrows against future tax revenue; we all know what a mess the government finances are. The idea should be to build a retirement nest egg, and get out of debt and stay out of debt.

A loan of any kind can be trouble, the best thing to do is build the emergency fund and stay out of debt. Remember we create our own emergencies – we are the ones who determine what an emergency is. A broken arm of a child is part of life, the emergency is getting them safely where they can receive proper care. The financial expense is just a part of life we need to plan for, that is why we save money. I have found that when we save for emergencies, we tend to have fewer of them.

Bottom line – be very careful about borrowing from a 401K. Do your best to do without borrowing for any reason and you will have a more prosperous life. I know there are times and circumstances where we as people feel stuck, but really what are they? Can’t the problem be solved some other way?