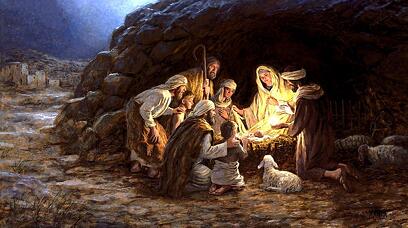 Merry Christmas to everyone who happens to read this blog. I hope that the joy of the birth of the baby Jesus brings peace to your hearts in the coming year. His birth is truly one of the most significant events in all of human history. For it ushered in the atonement that he performed on our behalf, which allows each of us to be forgiven of our sins. He also brought about the resurrection from the dead, now what had been prophesied for thousands of years was now a reality.

I hope through this year that each of us will work a little harder to be a better of a person, a little kinder, more civil, more polite, a little more loving to everyone we may meet. Kind patient acts may be just the thing that turns someone’s life around for the good. Perhaps a little slower to anger too. The older I get the less I see a need for anger.

I do hope that everyone has had a wonderful Christmas and that they will have a happy safe New Year. And I hope that your plans for next year are the best and most successful of all your years. May God bless each of you in your endeavors. And don’t forget to take a little time to count your blessings and to be thankful for what you have; you don’t have to wait until Thanksgiving to show gratitude for our many blessings.
0 Comments Click here to read/write comments

When talking about annuities, over the years I have met with many people who get a glazed look on their faces and ultimately they throw their hands up and say, “I am so confused”. I will admit that some investments are confusing. But here is one that almost anyone can get their arms around – a retirement income contract, commonly known as an annuity. (Say "an annuity" 10 times really fast!)

When considering the many types of investment vehicles in the market place these days, one should consider a variable annuity.

Annuities are primarily used for funding retirement income, so they are a long-term savings vehicle. Depending on the annuity contract, the point at which they begin paying the income is up to you.

There are three basic types of annuities: fixed, indexed and variable. A fixed annuity behaves much like a CD (Certificate of Deposit). On the contract anniversary, the insurance company establishes a new interest rate the company will pay over the next twelve months.

The advantage is that the interest earned, growth and dividends compound income tax deferred.

A variable annuity is also an income contract, rather than investing in the fixed assets of the insurance company and receiving a fixed rate of return, you may invest in a combination of sub-accounts.

These sub-accounts behave almost identically to mutual funds. They can have many of the same objectives as investing in mutual funds, such as, US large cap stock, US bonds, non-US stock, non-US bonds, real estate, etc. Some mutual fund companies have created partnerships with insurance companies to offer copy-cat funds inside variable annuities. Most variable annuity contracts also have a fixed account that will work similar a fixed annuity.

All of these accounts grow tax deferred. It’s like having a tax deferred mutual fund. The tax deferral will result in a greater amount of available funds at retirement, which can greatly increase your income.

Because an annuity is a retirement income contract, it is subject to early distribution penalties by the IRS, similar to an IRA. Making a withdrawal before age 59 ½, creates a 10 percent income tax penalty.

And the risk? People rightly associate mutual funds with risk – after all, aren’t they invested in the stock and bond markets? Can’t I lose my money? Yes, but no more than you would in regular mutual funds. That is why investors should be wise in how they are managed. Never invest and leave the money there and forget about it.

This prompts a discussion about the indexed annuities – these annuities are good investment vehicles. One client had much of his retirement money in an indexed annuity before the market meltdown of 2008. Many of his neighbors lost thousands (maybe millions) during that time a few lost their homes. He was just fine, did not lose a nickel as he says.

An indexed annuity pays a fixed rate of return based on the returns of a particular investment index like the S&P 500. If the index goes up the annuity earns a percentage of the amount it increases. So if the index goes up 10 percent, the annuity may earn 6 percent. But when the index drops and goes down below a certain level the account value does not follow it down; the annuity simply earns 0% that period. Many people would rather earn nothing than lose money.

With an indexed annuity you get the upside but not the down side.

Each type of annuity has its place for different investors. You may consider each one for a part of your retirement nest egg.

One thing to be mindful of is the insurance company that is offering the contract. Each one may be a little different and their fees for managing the annuity contract may vary. One annuity contract may charge a low flat monthly fee of as little as $20 and another as much as three percent. It is important to read the information about the contract and ask questions so you understand; don’t end up confused! Do you own an annuity?

Americans these days talk a lot about retirement, what they want to do, when they want to retire and where they dream about living. While there are many issues in planning a comfortable retirement, the most important is having enough money.

One fear these days is that a retired person may outlive their money. With people living longer, the 10 year retirement plan that worked for our grandparent’s generation no longer equals security.

To be on the proverbial save side, plan for at least 25 years of retirement. This puts an

thing you can’t afford.
extra strain on your retirement savings because it not only has to provide you with a decent income, but for a longer period of time.

According to the Employee Benefit Research Institute only 39.4 percent of the 156.5 million Americans working participate in an employer sponsored retirement plan. This lack of savings will greatly affect the spending of future retirees.

Second, plan on working at least until you can collect 100 percent of your socia
l security benefits. For those born after 1958 this is age 67. The longer you work, the more social security you will collect on a monthly basis. Working longer, will also allow you to put more away in your retirement plan and let what is there grow.

Third, open a Roth IRA, use a Roth IRA as your primary retirement savings vehicle. (Unless your company matches your contributions in a company sponsored 401K). Between these two you should save a substantial amount of your retirement funds. The big thing is to save regularly, make regular contributions to these accounts. No one forces you to do this, so you must be self-disciplined in your savings and simply DO IT!

If you don’t like that idea, plan on increasing your savings rate. Currently Americans save approximately 4 percent of their income. It should be at least 10 percent, if not 15-20 percent. The more you save now, the less you will have to work during the golden years.

Finally, don’t be afraid to use mutual funds and exchange traded funds (ETF’s). By using an effective portfolio management strategy, like the 7Twelve® portfolio model you can manage risk while at the same time maintain adequate returns. Outside Investment Advisors can assist in implementing this type of model. Using appropriate funds should keep your money growing at a fair rate and keep it ahead of taxes and inflation.
0 Comments Click here to read/write comments