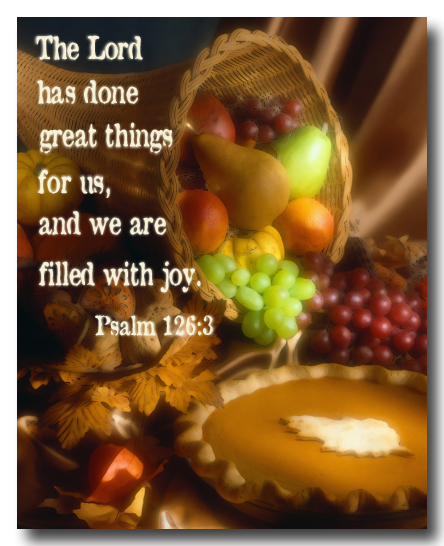 It has been nearly 400 years since the first Thanksgiving was held in Plymouth. I don’t think the pilgrims knew what they were starting – or how the holiday has evolved, perhaps they would not be pleased either. The original idea was for it to be three days of thanksgiving and prayer for our bountiful blessings in this great land. Now it’s a day of amazing feasting and preparation for the biggest shopping day of the year! Maybe someplace in the mix are a few prayers.

Growing up we always had family around, being the youngest of seven kids, my older brothers and sisters with their spouses and kids would get together as often as possible. My father would usually offer a humble heart felt prayer of gratitude for our many blessings. We would eat a meal my mother had prepared and visit, then she would whip some cream and we would eat pumpkin pie and visit some more. After a while folks would begin to head home with feelings of gratitude for a wonderful family and the blessings our Heavenly Father had poured out on us. Today in my own family we try to emulate those thanksgivings of my childhood.

I was saddened when I went shopping the day before for a few last minute things and the clerk tells me that if I still need something I can always come back and get it tomorrow because they will be open. I told the clerk at Walmart that I won’t be back tomorrow, and I felt bad that Walmart would be open on such a day. And that they would take employees away from their families on this holiday. I wished her a good holiday.

It’s too bad that corporations like that, just to get a competitive edge, require employees to work and stay open. Why can’t America just for two days a year (Christmas included) put aside the quest for more and more profits and take a break. Don’t get me wrong, I am all for capitalism and earning a good profit – but at what cost? Early Friday morning I saw in the news of altercations in Walmart stores, where people were videotaping with their phones the craziness of people grabbing discounted products. I had to ask myself WHY? Is a sale item that important that you would trample the person next to you to get the item? If so what have we become as a society? What were our prayers about the day before? That we would get to the sale items first?

In my mind nothing is that important. Period.

Thanksgiving should be about being grateful for the blessings that God has granted us individually and as a people. Gratitude is one of the most important virtues a person can possess and everyone should have it. We, as a people, have so much in life to be grateful for. I am personally grateful for my wife, kids, extended family, friends, clients, our great country, the gospel of Jesus Christ, and so many more things space won't allow to list.

I am reminded of the old Hymn, “When upon life’s billows you are tempest-tossed, When you are discourage thinking all is lost, Count your many blessings; name them one by one, And it will surprise you what the Lord has done.” Counting our blessings can be an eye opening exercise and one worth doing on a regular basis – not just saved for Thanksgiving. When was the last time you counted your many blessings and expressed gratitude for what the Lord has done? The feeling you have is amazing when counting your blessings and recognizing the Lord’s hand in providing each blessing. Count on…
0 Comments Click here to read/write comments

The Markets - What's Next?

Following the markets are a challenge pure and simple. It is always interesting to me how people predict the future. In this case it is a prediction based on history; if something is moving in one direction then chances are it will continue for a while in the same direction, with the caveat that it could change direction at any point in time, thus covering the prediction.

The idea of predicting never set well with me so, as an active Boy Scout, my feeling is to simply “Be Prepared”. That seems to be the better road to travel, do all you can to be prepared and let the chips fall where they may. It may be even less stressful to be prepared then to predict.

I remember listening to a stock picker once telling the audience that they only hoped to be right 51% of the time, if so they had a profitable year. I will gladly stick with a core portfolio design, with a little left over for exploring if the client wants to explore a little to try and find the 51%. Hence, the term “core and explore”.

Barbara Kollmeyer did a great job reporting on Goldman’s predictions for next year, so I am presenting her article in full for you to read below. I am interested to see how close Goldman comes next year. It will be a very dicey year, with more of Obamacare coming into full effect, more Dodd Frank being implemented, and other regulations that are geared to choke business a little more.

Goldman Sachs has released its its top ten market themes for 2014. It’s calling for U.S. growth to accelerate to 3% and another “solid year” for equities, notably in developed markets, with some caveats of course.

In a separate note released Wednesday, Goldman’s David Kostin and other strategist laid out their S&P 500 SPX +0.31% forecasts for next year, reiterating an end-2014 target of 1,900, a gain of 6% — its fair value estimate. (Note, that’s a little more sunshiny than that 12-month S&P target of 1,840 from Morgan Stanley, aka Bob Marley.)

While multiple expansion was the name of the game for stocks in 2013, next year’s returns will depend on earnings and money flow rather than further valuation re-rating, says Goldman. And valuation is the biggest wildcard. Goldman says its year-end 2014 price target reflects a slight multiple contraction to a p/e of 15.2 forward EPS.

Durability of the expansion matters, says Goldman, and if above-trend growth continues past 2014, the output gap will narrow and the cost of equity will fall, with both trends supporting a higher P/E multiple. Goldman sees forward P/E for the S&P 500 of 16 times, with the index reaching 2,100 by the end of 2015 and 2,200 by the end of 2016.

So where to go with all that? Here is Goldman’s four recommended strategies for next year:
1.     Growth over value. Russell 1000 Growth  RUI -0.36% should beat Russell 1000 Value as slowing earnings growth, falling equity risk premium and higher bond yields will benefit growth.
2.     Firms investing in capital expenditure. Companies that have under-invested in recent years, but have high return on invested capital that Goldman thinks will spend more in 2014 should create a platform for future growth.
3.     Companies with high buyback yields. Goldman’s sector-neutral basket of 50 stocks with the highest share-repurchase yield should benefit as firms return more cash to shareholders.
4.     Stocks with high operating leverage. Economic growth will boost sales and firms with a high degree of operating leverage will benefit most in terms of a lift to EPS.

As for sectors, Goldman is re-shuffling its pro-cyclical sector allocation, recommending overweights in IT, consumer discretionary, industrials vs. underweights in consumer staples, utilities and telecom services. Financials, materials, energy and health care are market weights.

Long-term Care Who Needs it Anyway

Once my mother asked me about long-term care insurance, she had obtained a policy through AARP, which was short on benefits, or peace of mind. I was early in my career and visiting my mother when the conversation started. Now my mother was an amazing women, she was a retired school teacher, served a church mission, tore down an old dilapidated house and built a new one in its place, and finally settled into a comfortable retirement, she raised seven children in Los Angeles in the 50’s through the 70’s.

We looked at a some options and settled on one that was a little more expensive (maybe $25 per month), but it had more than twice the benefits. Today’s policies are even better. 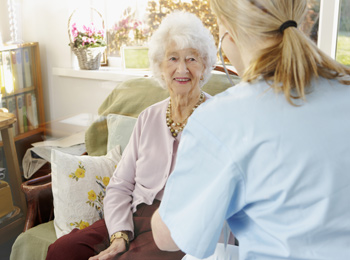 When you are in good health and life is clicking along smoothly, it seems that a long stay in a nursing home or even home health care is something that happens to the other guy! Similar to the young folks who are newly married, maybe with one or two kids, and thinks that life insurance is for people who live riskier lives. This is simply denial!
In today’s world with the higher standard of care, medications, diets, etc., the need for long-term care is more likely than not for our older and wiser population. Families find it more difficult to provide the necessary level of care that our aging population needs. Providing for long-term care is a necessity.
So the problem becomes, which assets are mom and dad going to sell/liquidate in order to provide the care? The family home? The retirement account? The family business? And how will the remaining spouse survive when one enters a care center?

About ten years ago my mother, who was in great health, was diagnosed w
ith Alzheimer’s. She began the medications and had to fight with medicare over the payment. After a couple years her home was too much for her to manage so she went into a retirement center, where she had an independent apartment, soon after that, my sister filed a claim on her long term care policy to help pay the bills.

It was amazing having the policy, it allowed my mother to have a nice place to live and have a nurse on duty if needed. Eventually, when she required more care she moved to a different center with an Alzheimer’s unit, which provided the additional attention she needed.

This policy, allowed my mother to really enjoy her final years not worrying about how she was going to be cared for, should she need the extra care. This is peace of mind! She passed away this past spring and her family was all around, she left an amazing posterity, with over 40 grandchildren, and over 50 great-grandchildren to date. My sisters who had the main charge of caring for her, (making the medical/financial decisions, etc.) expressed their gratitude for the policy. It provided them with the peace of mind in knowing that our mother would receive the best car
e and be comfortable in her final days. In short it was a great blessing.

This piece of mind came with a cost, a small cost compared to the benefit. I don’t need to share numbers, simply because everyone is different and with today’s policies, things are different; what matters is the peace of mind, and that is the same. Do you need more peace of mind?
0 Comments Click here to read/write comments