Qualifying with the New Mortgage Laws and the Housing Recovery

Since the housing bubble popped five years ago, mortgage lenders have been reluctant to lend. The banks held on through the devastating loses and are now cautiously finding themselves in a position to begin lending again. One of the reasons for banks being so cautious in mortgage lending now is that Freddie Mac, Fannie Mae and the FHA have been pressing lenders to buy back home loans that went bad after the crisis.

Another reason lenders remain cautious is in part because of financial reform rules. Under the 2010 Dodd-Frank law, mortgage borrowers must meet eight strict criteria including earning enough income and having relatively low debt. If the borrower doesn't meet those hurdles and later defaults on a mortgage, he or she can sue the lender and argue the loan should never have been made in the first place.

Those kinds of rules have helped build a wall between prime and subprime borrowers. Lenders have been soliciting consumers who are legally easier to serve, and avoiding those with weaker credit scores and other problems. Subprime borrowers accounted for 0.3 percent of new home loans in October, compared with an average of 29 percent for the 12 months ended February 2004, according to Mark Fleming, the chief economist of CoreLogic (CLGX).

As part of these rules, the lender must collect and verify a borrower's financial information. The lender has to check the information using reliable documents, such as a W-2 or a paystub. The lender generally must consider eight types of information:

4. The monthly payment for the mortgage.

5. Monthly payments on other mortgage loans borrowers get at the same time on the same property.

6. Monthly payments for other mortgage-related expenses (such as property taxes)

8. Monthly debt payments, including the mortgage, compared to monthly income (“debt-to-income ratio” which cannot be more than 43% or $43 for every $100.) The lender may also look at how much money is left over each month after paying debts.

Thanks to the Consumer Financial Protection Bureau, some other new rules that became effective in January include:

Restrictions on dual tracking. In the past, borrowers dealing with mortgage troubles sometimes found that their mortgage servicer had moved forward to foreclose on their home at the very same time it was working with them on a potential loan modification. That’s called “dual tracking” and the new rules set up clear guidelines that restrict this practice.

More help for troubled borrowers. Too often borrowers have had to apply over and over again for programs that might help them keep their homes, being asked to send in the same paperwork repeatedly. The new rules require mortgage servicers to evaluate a borrower who files a complete application for help for all the options that are available to that borrower. That means no more multiple rounds of applications and wasting of precious time and resources for the homeowner seeking help!

No more runarounds and missing documents. The rules require mortgage servicers to train their people to answer borrower's questions and, if the borrower does run into trouble, the servicer has to assign people to help them. The servicer also has to have policies in place to make sure they don’t lose their paperwork.

As mortgage revenue continues to decline, lenders such as Wells Fargo are now even considering borrowers with credit scores as low as 600 - in the past, 640 was the lowest they would consider. Lenders have plenty of incentive for reaching lower on the credit spectrum now; since the middle of last year, interest rates for mortgages have been rising and are expected to reduce the total U.S. Mortgage lending for 2014 by 36%- down to $1.12 trillion. According to the Mortgage Bankers Association, this is due to a large drop in refinancing.

A recent report from the Urban Institute and Moody's Analytics argued that a full recovery in the housing market "will only happen if there is stronger demand from first-time homebuyers. And we will not see the demand needed among this group if access to mortgage credit remains as tight as it is today."

To be sure, credit is still only trickling down to subprime borrowers. Jamie Dimon, chief executive of the second-largest U.S. mortgage lender JPMorgan Chase, said on a conference call last month that he didn't envision a "dramatic expansion" of mortgage credit because of a continued lack of clarity from the government agencies on their repurchase demands.”

While it is good to see the lenders starting to come back to the table, there is yet another factor that needs to be considered: Will the borrowers come to the table - and more specifically, the first-time home buyers who are essential to the housing market recovery? The pundits believe that there is a large amount of pent-up demand for housing that will boost economic growth for quite some time into the future. While this may be the case in theory, it is based upon assumptions that "past is prologue". However, given the current economic dynamics of stagnant wage growth, the structural employment shift, as well as the unknown consequences of the Affordable Care Act that seems to be paralyzing small businesses, it is unlikely that the consumer will be able to re-lever their budget as in the past.

The rising risk to the housing recovery lies in the Fed's ability to continue to keep interest rates suppressed. It is important to remember that individuals "buy payments" rather than houses. Every increase in the mortgage rate results in an increase of the monthly mortgage payment. With wages remaining suppressed, 1 out of 3 Americans no longer counted as part of the work force, or drawing on a Federal subsidy, the pool of potential buyers remains constrained. While there are many hopes pinned on the housing recovery as a "driver" of economic growth in 2014, the data suggests otherwise; the real driver of an economic recovery is full time employment that leads to rising wages and savings.

So while there have been many changes made to the mortgage industry, many favoring the borrower and ensuring that the problems that lead up to the collapse don't happen again, without the other economic factors in place securing a borrower’s ability or stability, it is unlikely that the banks and the housing market will see the kind of rebound that they are needing.
0 Comments Click here to read/write comments

Social Security Will It Be There

Recently I was told that there are 3-4,000 people per month in the Dallas Metro area who turn 65; the baby boomers are entering retirement in full swing. That is a lot of folks who are now descending on the local social security offices to collect the long awaited benefits, for, which they contributed many years.

Many folks wonder if they will ever receive any benefits, due to the financial state of the country and in particular the Social Security Administration (SSA) Trust Fund. I have always told people that the money may not be there, but you will be paid. After all, when have you known the government to shutter an agency and send over 68,000 government workers out on the street to find another job? It just doesn’t happen. 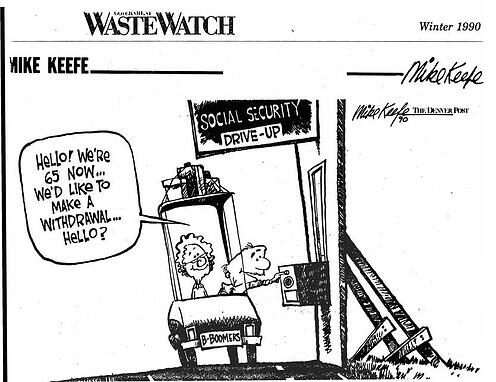 At times, when I find a really good cartoon, I cut it out of the paper, like the one attached. This says drawn in winter 1990, 24 years ago when the baby boomers were in their early 40’s. Fast forward to 2014 and it seems nothing has changed!

So now, that we have established that Social Security will be there, now comes the question of how or when to take the benefit? There are several strategies to the challenge of maximizing the Social Security payment, while keeping the tax man at bay.

Here is one idea. Most people don’t know that they can “file and suspend”, meaning that they can file for the benefit and then immediately suspend receiving the benefit until they are a few years older. This strategy may be best used when one spouse has a higher income than the other. The spouse with the higher income files and immediately suspends receiving the benefit, while the lower-earning spouse files and receives half of the benefit.  While the one benefit is suspended it continues to grow until the suspension ends.  Once the higher-earning spouse reaches age 70, both can collect their own benefits in full.

While many people continue to work during the early years of retirement, they will want to watch how their income is paid to them so they can minimize the taxes on their Social Security. They may want to take money from their IRA’s first before receiving Social Security, thus reducing the taxable income from that source early on. This may help keep Social Security payments from being taxed if payments are put off for a few years.

How are you planning for your Social Security? Are you using any strategies to get the most benefit you can?
0 Comments Click here to read/write comments