Recently, I came across a great explanation/story about how bonds worked and I added an element that explained how derivatives worked.  I have never had a drink, I think the story is rather funny simply because I have over the years been to many business parties where the booze flowed rather freely and I could imagine this sort of thing happening. 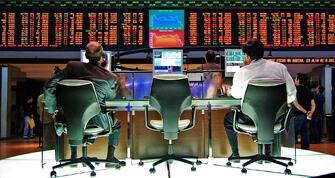 Heidi is the proprietor of a bar in Detroit. She realizes that virtually all of her customers are unemployed alcoholics and, as such, can no longer afford to patronize her bar. To solve this problem, she comes up with new marketing plan that allows her customers to drink now, but pay later. She keeps track of the drinks consumed on a ledger (thereby granting the customers loans).

Word gets around about Heidi's "drink now pay later" marketing strategy and, as a result, increasing numbers of customers flood into Heidi's bar. Soon she has the largest sales volume for any bar in Detroit.

By providing her customers' freedom from immediate payment demands, Heidi gets no resistance when, at regular intervals, she substantially increases her prices for whiskey and beer, the most consumed beverages. Consequently, Heidi's gross sales volume increases massively.

A young and dynamic vice-president at the local bank recognizes that these customer debts constitute valuable future assets and increases Heidi's borrowing limit. He sees no reason for any undue concern, since he has the debts of the unemployed alcoholics as collateral.

At the bank's corporate headquarters, expert traders transform these customer loans into DRINKBONDS, ALCOBONDS and PUKEBONDS. These securities are then bundled and traded on international security markets. Naive investors don't really understand that the securities being sold to them as AAA secured bonds are really the debts of unemployed alcoholics. Nevertheless, the bond prices continuously climb, and the securities soon become the hottest-selling items for some of the nation's leading brokerage houses.

Enter the derivatives… a derivative is basically an insurance policy on the bonds that buyers get to help insure that the bonds will one day pay off. These policies are traded too on the securities markets, however they are completely unregulated. Because the policy insures the bond it helps strengthen the bonds’ rating. The unregulated nature of the derivatives allows for the issuing company to extend its self beyond what typical capital requirements of other financial institutions, making these financial instruments extremely risky. (The greater the risk, the greater the reward; natural risk and return economics.)

For example a bank typically has a leverage ratio of 8-10 percent capital so for every $1,000.00 they lend they keep $80-100 or a ratio of 10:1 or 12:1 in what is called tier-one capital. However some of the derivatives were written by institutions whose capital level was extended to as much as 40:1 on up to 100:1; so they were keeping as little as $10.00 for each $1,000.00 they insured. Derivatives are not offered by your typical insurance companies.

Now for the rest of the story…

One day, even though the bond prices are still climbing, a risk manager at the original local bank decides that the time has come to demand payment on the debts incurred by the drinkers at Heidi's bar. He so informs Heidi.

Heidi then demands payment from her alcoholic patrons, but being unemployed alcoholics they cannot pay back their drinking debts. Since, Heidi cannot fulfill her loan obligations she is forced into bankruptcy. The bar closes and the eleven employees lose their jobs.

Overnight, DRINKBONDS, ALCOBONDS and PUKEBONDS drop in price by 90%. The collapsed bond asset value destroys the banks' liquidity and prevents it from issuing new loans, thus freezing credit and economic activity in the community.

The suppliers of Heidi's bar had granted her generous payment extensions and had invested their firms' pension funds in the various BOND securities. They find they are now faced with having to write off her bad debt and with losing over 90% of the presumed value of the bonds. Her whiskey supplier also claims bankruptcy, closing the doors on a family business that had endured for three generations. Her beer supplier is taken over by a competitor, who immediately closes the local plant and lays off 150 workers.

The investors turn to the insurance companies who insured the bonds and demand that they too pay up, however because they did not keep enough capital to cover such large losses they implode and seek a bail out to keep from laying off thousands of employees and to keep the world markets open. After all without insurance on the bonds, no one would buy the bonds in the first place (even government bonds) and thus capital flows would completely stop. Totally crippling not just Heidi’s community of Detroit, but the world as we know it!

Fortunately though, the bank, the brokerage houses, insurance companies and their respective executives are saved and bailed out by a multi-billion dollar cash infusion from the Federal Reserve Bank and the Government.

The funds required for this bailout are obtained by new taxes levied on employed, middle-class, non-alcoholics.

If you want check if your portfolio holds derivatives let us know by clicking here.

Note: I could not find the original author of the story about Heidi's Bar to give proper credit; I added several paragraphs because the original story did not actually talk about derivatives - just bonds.