The Man Who Killed the Bank

Long before we had the Federal Reserve Bank or the FDIC to insure the deposits of the general population, banks had to manage their deposits and losses on their own. In the early days of our Republic there was not branch banking or mega large banks run by powerful people. It wasn’t until the latter-half of the 1800’s that banking started to become really big business.

In the moral relativism of today's society, principles are sold out for pragmatism, making courageous stories like Andrew Jackson's as rare as gold-backed currency. Much could be learned by the study of Andrew Jackson's stand against the "moneyed-interest" drive to re-charter the Second National Bank. The following is a shortened account of this historic battle between the President Andrew Jackson of the United States of America versus President Nicholas Biddle of the Second National Bank. 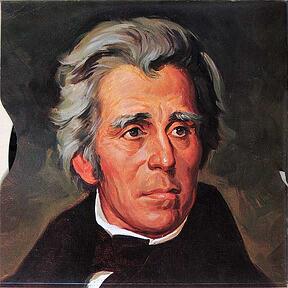 Jackson lived in the thriving American West, witnessing first hand the dire effects of inflationary banking policies in the western land prices. Jackson learned the salutary lesson of hard money (gold and silver coins) versus the prevalent paper based inflationary policies loved by bankers and wealthy merchants. Inflationary methods allowed banks to print paper, pretending the paper had value, even thought it wasn't backed by gold or silver. Without a check on the banks, like requiring banks to submit gold for paper dollars when requested, one can easily see how banks would fall into the trap of printing more paper than could possibly be redeemed on demand.

When Andrew Jackson was elected President of the United States, one of his missions was to end the syndicate of control over America's money supply by three power hungry groups: foreign interests, big business, and big politicians. Jackson believed that banks ought to run like any other businesses, having to sink or swim based upon their own business acumen, and needing reserves to secure their loans provided.

Nicholas Biddle was the president of the Second National Bank. The Second National Bank received the deposits of America, ensuring its solvency, and providing a special deal for the bank and its investors at the expense of other banks as well as the customers. When Jackson was elected president, Biddle was not alarmed with his rhetoric, having heard many politicians boast of drastic changes when entering office, only to conform into the system when elected. But Jackson's character was different; his campaign promises aligned with his actions after his election, necessitating a showdown between the President and the money interests behind the Bank.

Jackson shared his disdain for the Bank in his first Presidential message proclaiming, "Both the constitutionality and the expediency of the law creating this bank are well questioned by a large portion of our fellow citizens, and it must be admitted by all that it has failed in the great end of establishing an uniform and sound currency."

Biddle seemed unconcerned initially and responded to Jackson's message with cool indifference. He wrote of Jackson, "They should be treated as the honest though erroneous notions of one who intends well." Clearly, Biddle did not believe Jackson had the courage or fortitude to fight against the entrenched money-interests feeding off of America's body politic. However, once Biddle realized Jackson's earnest intentions to end the Bank's charter he quickly rallied his political supporters to his cause.

Using smear campaign practices similar to those used by today's politicians, as well as threats of calling all the loans currently out on the American people, Biddle ramped up intimidation against Jackson in the attempt to thwart his policies. Jackson was unmoved. And when a recharter bill for the bank that had passed in both houses was placed on his desk for approval right before his re-election, he courageously vetoed it, knowing that he couldn't go against his principles that a truly free society must be based on a sound monetary system.

Following through on the threat he had hoped would sway the President, Biddle launched a campaign of loan closures across America, causing financial panic among the state banks and business community. They were forced to either pay back their loans or collapse into insolvency. State banks and businesses screamed for relief, appealing to Jackson to end the war and submit to the Bank's recharter.

Jackson denounced the Bank's action to his cabinet. The numerous bank and business closings only steeled Jackson's resolve to end Biddle's undue influence in the American economy. Many state leaders, awakened by the inordinate power that the Bank held over the economy, began to recognize the truth of Jackson's veto claims. In truth, the President believed that any power capable of causing a panic of this magnitude was not healthy for the freedoms of the American people.

Biddle truly believed, that by causing harm and suffering in America, he could control the political leaders of our country. In hindsight, had it been any other President besides Jackson at this time, he would have been right. Jackson, however, stood his ground and eventually won the Bank war, despite receiving many battle scars along the way.

Jackson did not use his veto pen to get re-elected, he simply believed that fiat money was wrong for our country. The election result: he won by a landslide! He proved that a person with conviction and character can stand his ground and win, no matter the size of the forces aligned against him. Boldly, at one point in the battle, Jackson told his Vice-President Martin Van Buren, “The Bank is trying to kill me. But I will kill it." Jackson's example demonstrates a leader's powerful effect upon others. When a person has the courage to stand strong, he strengthens the spine of others who recognize the truthfulness of his fight between right and wrong.

Andrew Jackson was a man of strong convictions. He stood by his love of liberty even when it hurt him politically to do so. It takes courage to stand by one's convictions, especially when a person is offered peace and financial rewards to surrender them. Courage isn't the absence of fear; rather, it's the acknowledgment that one's principles are bigger than one's fears, regardless of the consequences.

Courage, just like lack of courage, is contagious. Character is courage and integrity combined. Integrity is identifying what is right and courage is the ability to stand for truth even when it hurts. Jackson accomplished many things in his life, both militarily and politically. However, I believe his finest hours were in his courageous stand against the Second National Bank. May today's leaders learn similar courage in today's fight against tyranny.