People Who Are Still Breathing NEED This

Two weeks ago the world lost a very talented musician, Prince. While I must admit I have never been much of a fan of his work, or some genres of most modern musicians, he was amazingly talented. And I am sad for his family's loss. He was young - only 57 years old - young by society’s standards where we routinely expect people to live active lives into their 80's and maybe into their 90's.

Prince is estimated to have amassed a large estate between $300 to $500 million. This was news to me as I had no idea how large his estate was. I think this is fantastic. For those who know me I thrill at learning of people's successes in life, however they define their success. That is one reason I love what I do - helping people achieve success with their financial goals, whatever they may be.

Back to Prince. I was surprised to learn that he died with no personal estate plan. He chose to use the one the State of Minnesota had planned in their estate laws instead - he died “intestate” (without a will). Now this is simply crazy! This is the example of why everyone needs at least a will, and should have a personal estate plan prepared by a real estate planning attorney. 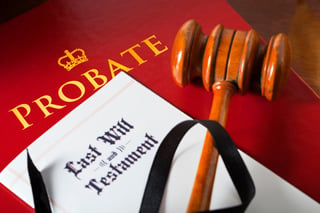 Now it is estimated that approximately 55% (40% federal and 15% state) of his estate will go off in estate taxes. Think about this, he worked from a young age (teenager) practicing the guitar to become a world famous musician, amass a large estate because of his successful use of his talent, only to pay huge income taxes all his life and then the final rub to pay another 55% when he passes away. That works out to be $165,000,000 to $275,000,000 paid to the government (state and federal)!

Not to mention that his estate maybe tied up in probate court for years to come. What a nightmare for his family!

Here is a person who could easily afford the best advice possible from the sharpest legal minds in our country, but chose not to do so. Clearly he had attorneys who helped review his contracts and other investment advisors who helped him manage his money. It saddens me to think not one of them sat him down and said someday you will die, you should be prepared. Perhaps they tried to do this and he ignored them, like many young people who think they will live forever.

Those of you who are young - or better yet those of you who are still breathing, young or old - need a valid estate plan. Not one referenced by the drive by financial planners, self-prepared on some internet website for $29.99. Don't create problems for those you leave behind - go see a real attorney who specializes in estate planning and get it done right.

Now you may be saying I am not wealthy like Prince; that is not the point everyone needs an estate plan if you own a home, cars, business, or any other assets, you need a plan. Besides a will or trust a proper estate plan also includes certain documents needed while you are still living, like a Medical Power of Attorney, a Living Will,  and other documents.

If you are part of a second marriage, you need an estate plan. I have personally seen a father disinherit his children and grandchildren and everything went to the second wife, completely different from his wishes. These things happen all too often. If you don’t know of a good estate planning attorney you can I can provide you with

I know several. I wish you all the best in the proper planning for the future disposition of your hard earned assets.

"Death is not the end. There remains the litigation over the estate" ~ Ambrose Bierce