Over the years, banks experienced a metamorphosis from simple corner branches offering savings, checking, and basic bank loans, to mega financial entities offering investment products, mortgages, specialized lines of credit, investment banking, and private banking. All of these additional services along with the regular “fees” banks charge is how they earn money.

The dismantling of the depression era regulation, the Glass-Steagall Act, also known as the Banking Act of 1933, allowed banks, insurance companies, and investment banks the ability to enter into multiple business functions. Some economists believe that the loosening of these regulations, along with the tightening of the Community Reinvestment Act (CRA) that started in the mid 1990s may have led to the financial crisis of September 2008.

For years banks basically made money from the interest earned on their loans and mortgages. This interest earned by banks is known as net interest margin, thus greater interest rates essentially earned larger net interest margins. This formula was fine for years until rates started to drop. As rates dropped, banks were able to earn less of a margin. That margin is the difference between what banks pay the depositors and federal reserve bank to borrow funds versus what they lend it out for to both retail and institutional customers. 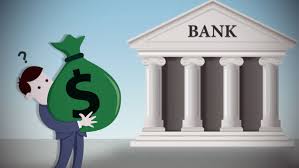 And yes, when you are a depositor to a bank you are lending your money to the bank, so they can re-lend it out at a higher rate. The difficult part of banking is to get enough people to “lend the bank money” through deposits. Having your deposits at the bank is their life blood. Incidentally, that is one way for a bank to fail - if most customers withdrew all their money at a time when the bank could not call in enough loans to meet the needs of the depositors. Historically this is known as a “run on the bank,” which is what happened in the early 1930’s, causing thousands of banks to fail.

Credit Card Debt On The Rise

An example of how banks make moneys the use of credit cards. U.S. banks have ramped up lending to consumers through credit cards at the fastest pace since 2007. The industry has accumulated an additional $18 billion of credit card loans and other types of revolving credit in the past three months.

Data released by the Federal Reserve shows that the U.S. banking industry has seen credit card and other revolving loans rise at a annual rate of 7.6% in the second quarter of 2016, to $685 billion. The credit card business remains among the most profitable in banking as banks can charge much higher interest rates than other loan types, with average credit card rates between 12% and 14%.

Taking the lower rate of 12% with the typical CD rate of 1.0%, that gives the bank a net interest margin of 11.0% on that book of business. However for most banks, (small community banks) credit cards are a very small percentage of their business. To the larger banks, like Capital One and many others, credit cards lending is a much larger part of their business model. Along with credit card lending the default rate is much higher too, which lowers profits.

As credit card debt levels have risen, so have reserves for losses as banks anticipate delinquencies to rise. According to Federal Reserve data, within the past year U.S. banks have piled on about $54 billion worth of loans to consumers through credit cards,. Financially savvy consumers that pay their balances down each month avoid hefty interest charges, but those that don’t, known as “revolvers,” pay average rates of between 12% to 14% and significantly more, as much as 30%, if they are considered higher risk borrowers.

Seven years since the recession ended, consumers who were hit hard during the financial crisis have found their credit scores improving.  Bankers attribute a rise in credit card issuance to rising home prices and low unemployment. Banks are also lending more since one of the most important drivers of their profits are net interest margins, the difference between returns on assets and the cost of funds, which remain near their lowest levels in decades. The average credit limit per card for a subprime borrower is about $2,300, compared with about $11,500 for the safest customers.

How does this affect you personally? I would suggest monitoring your banking relationships regularly. Review the fees you pay, what rates you pay on credit cards, etc. Look for the low cost solutions. And above all GET OUT and STAY OUT OF DEBT! Don’t get sucked into the emotional feeling that you “need” something so badly that you will borrow for it (home excluded). The credit card offers are so enticing with all the points they give you back, etc.; these are bank promotions and marketing games.  Just get out and stay out of debt. Period. Your real financial strength is not from your credit score - it is from your ability to stay out of debt.

Sources: Federal Reserve, FDIC, Office of the Comptroller of the Currency

"Gold is money, anything else is credit." - J.P. Morgan

Want to Improve Your Credit Score

The other day I was in a store that was having a closing sale nearly everything was 70% off. I struck up a conversation with the manager who was losing his job. I asked him about what he was going to do next. He told me that he had been with the company for 21 years and he was not sure, but he was going to just hang out until he decided and found the right opportunity. Then he said this, “when I learned that the two companies merged, and in the future there was a chance I might lose my job, my wife and I decided to get completely out of debt. So we have no debt and can live on very little.”  It was just over two years after the merger that we spoke and the store he managed was now closing. I though how insightful. I was thrilled to learn of another person who was debt free and had the freedom to choose what to do next. 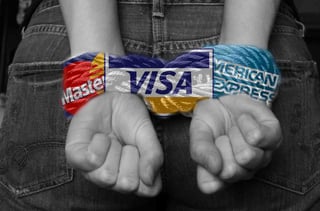 Becoming debt free should be a goal of each person. I have seen young college graduates who have finished school with well over $200,000 in student loans. As one client was telling me it is “discouraging”. The bondage of debt is discouraging! And what do many young graduates do - load up more debt and buy a new automobile! This debt can be extremely onerous! Read more about auto debt here.

This weeks article is mostly coming from a friend, Shawn Lane who is the Chief Operations Officer at Financial Renovations Solutions, (FRS). His company has helped many people improve their credit score and at the same time get more of their debt paid off. Being debt free greatly strengthens your financial position. Simply put, It is FREEDOM.

Unfortunately some people find that they have slipped so much into debt that creditors start calling and some accounts get sent to collections. Shawn provides some answers in those difficult situations:

Will paying off a collection account improve my credit score?

I get this question a lot. Although I would never suggest NOT paying your debts, you need to be very careful when paying a collection account. If you are 100% sure you owe it, then maybe you should pay it (more on this later). However, if your goal is to improve your credit score, paying it will likely have the opposite, negative effect.

Further, paying a collection account does NOT remove it from your credit report. You end up spending your money and reducing your credit score.

I know Shawn has worked with people all over and is straight up honest in what he does. He truly cares about his clients. If you would like to contact him,

, he will provide a free consultation. Everyone of us knows someone who needs help with their debts, pass this article on to them, you never know what will really flip a switch with someone. I wish you the best of luck in obtaining real freedom, by becoming debt free.

"Continuous effort - not strength or intelligence - is the key to unlocking our potential." ~ Winston Churchill