Military Lessons for the Entrepreneur

What do military generals and entrepreneurs have in common? Are there parallels that can be drawn from military science and building a business? What do warfare strategies and creating a new product have to do with one another? There are many parallels between military science and business. Are there any lessons about entrepreneurship that Sun Tzu's “The Art of War” can teach us? Yes. 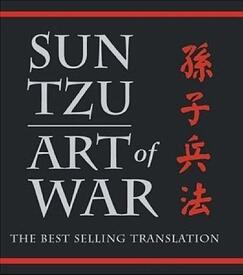 At times building a business can feel like outright war. Business by nature is competitive. Many business leaders have studied military strategy in order to enhance their business acumen. One of the foremost texts being Sun Tzu's ancient manuscript, “The Art of War”, written over 2500 years ago. Sun Tzu's thesis is to “win all without fighting,” or to capture the market without falling into a financial blood bath against your competition. Teachings from this book are applicable to an entrepreneurs' wins and losses on the business battlefield – the marketplace.

Sun Tzu says, “If you know the enemy and you know yourself, you need not fear the result of a hundred battles.”

Sun Tzu admonishes us to study our competition in order to ascertain what gaps they are leaving in the marketplace. This is primarily intended to avoid engaging the established competition head-on, which will ultimately lead to a financial blood bath. By keeping a finger on the pulse of technologies and consumer/social changes and shifts, a good business leader can know his competition's weaknesses as well as his own. This can also allow him to focus on his strengths in order to attack the opportunities in the marketplace that are under-served by his competition.

Sun Tzu says, “Victorious warriors win first and then go to war, while defeated warriors go to war and then seek to win it.”

Sun Tzu's words underscore the importance of the lean product development methodology. This methodology focuses on creating a minimal version of the product with core features, test launching that product and the incrementally improving it from early user feedback. This proposed capital- efficient exercise conserves resources and focuses the team's attention on the product itself. Once the product is fine-tuned to a version with features guided by user feedback, then it will be ready for a larger scaled launch. In essence, this is a “win” before going to war.

Sun Tzu says, “Defeated warriors go to war first and then seek to win.” This can be demonstrated with product failures. There are many product failures, but one that comes to mind was the “New Coke” soft drink. Clearly something went drastically wrong with this product.

This phrase speaks of intensity and commitment as well as creativity. Small, passionate teams that are dedicated and focused on a common mission are extremely effective and can achieve anything, especially when they are given the lee-way they need to creatively overcome challenges and set-backs. When everyone on the team has bought into an all-or-nothing mentality and given the freedom to create, each is capable of achievement far beyond what they ever thought possible.

Sun Tzu's ideas are timeless principles that entrepreneurs and business leaders can implement in order to have clarity of their mission, their purpose, and their commitment to the success of their team's objectives. While it may feel a bit silly for business owners to liken themselves to ancient warfare generals, Sun Tzu's teachings apply and they are implemented in some manner by today's successful entrepreneurs. What rules do you use in your business to bring about success?

Entrepreneurs, The Life Blood of Freedom

The word “entrepreneur” originates from a thirteenth-century French verb, entreprendre, meaning “to do something” or “to undertake.” By the sixteenth century, the noun form, entrepreneur, was being used to refer to someone who undertakes a business venture. The first academic use of the word by an economist was likely in 1730 by Richard Cantillon, who identified the willingness to bear the personal financial risk of a business venture as the defining characteristic of an entrepreneur.

In the early 1800s, economists Jean-Baptiste Say and John Stuart Mill further popularized the academic usage of the word “entrepreneur.” Say stressed the role of the entrepreneur in creating value by moving resources out of less productive areas and into more productive ones. Mill used the term “entrepreneur” in his popular 1848 book, Principles of Political Economy, to refer to a person who assumes both the risk and the management of a business. In this manner, Mill provided a clearer distinction than Cantillon between an entrepreneur and other business owners (such as shareholders of a corporation) who assume financial risk but do not actively participate in the day-to-day operations or management of the firm.

Successful entrepreneurs expand the size of the economic pie for everyone. Bill Gates, who, as an undergraduate at Harvard developed BASIC for the first microcomputer, went on to help found Microsoft in 1975. During the 1980s, IBM contracted with Gates to provide the operating system for its computers, a system now known as MS-DOS. Gates procured the software from another firm, essentially turning his invention into a multibillion-dollar product. Microsoft’s Office and Windows operating software now run on about 90 percent of the world’s computers. By making software that increases human productivity, Gates expanded our ability to generate output (and income), resulting in a higher standard of living for all.

Sam Walton, the founder of Wal-Mart, was another entrepreneur who touched millions of lives in a positive way. His innovations in distribution warehouse centers and inventory control allowed Wal-Mart to grow, in less than thirty years, from a single store in Arkansas to the nation’s largest retail chain. Shoppers benefit from the low prices and convenient locations that Walton’s Wal-Marts provide. Along with other entrepreneurs such as Ted Turner (CNN), Henry Ford (Ford automobiles), Ray Kroc (McDonald’s franchising), and Fred Smith (FedEx), Walton significantly improved the everyday life of billions of people all over the world.

Economists William Baumol and Peter Boettke popularized the idea that free market capitalism is significantly more productive than alternative forms of economic organization because, under capitalism, entrepreneurial effort is channeled into activities that produce wealth rather than into activities that forcibly take other people’s wealth.

Baumol and Boettke insist that entrepreneurs are present in all societies. In government-controlled societies, entrepreneurial people go into government or lobby government, and much of the government action that results — tariffs, subsidies, and regulations, for example — destroys wealth. In economies with limited governments and rule of law, entrepreneurs produce wealth.

Some entrepreneurs have some serious challenges with their businesses. While I don't condone certain businesses that are legal in our country, that does not mean they don't have specific challenges. The new cannabis  businesses in Colorado for example are having difficulty establishing banking relationships, primarily due to banking regulations. Which many would argue limits an entrepreneur's freedom.

Baumol’s and Boettke’s idea is consistent with the data and research linking economic freedom, which is a measure of the presence of good institutions to both entrepreneurship and economic growth. The recent academic research on entrepreneurship shows that, to promote entrepreneurship, government policy should focus on reforming basic institutions to create an environment in which creative individuals can flourish. That environment is one of well-defined and enforced property rights, low taxes and regulations, sound legal and monetary systems, proper contract enforcement, and limited government intervention.

Research is showing that the public policy that best fosters entrepreneurship is economic freedom. It focuses on the reasons why government programs are likely to fail, and on how improved “rules of the game” (lower and less complex taxes and regulations, more secure property rights, an unbiased judicial system, etc.) promote entrepreneurial activity. Steven Kreft and Russell Sobel (2003) showed entrepreneurial activity to be highly correlated with the “Economic Freedom Index,” a measure of the existence of such pro-market institutions.

Economists find that infusions of venture capital funding do not necessarily foster entrepreneurship. Capital is more mobile than labor, and funding naturally flows to those areas where creative and potentially profitable ideas are being generated. This means that promoting individual entrepreneurs is more important for economic development policy than is attracting venture capital at the initial stages. While funding can increase the odds of new business survival, it does not create new ideas. Funding follows ideas, not vice versa.

There are many entrepreneurship quotes that are relevant and important to every entrepreneur’s journey. Here are a few favorites:

Success is walking from failure to failure with no loss of enthusiasm.– Winston Churchill

It’s not about the ideas. It’s about making the ideas happen.– Scott Belsky

Timing, perseverance, and 10 years of trying will eventually make you look like an overnight success. — Biz Stone

No more romanticizing about how cool it is to be an entrepreneur. It’s a struggle to save your company’s life – and your own skin – every day of the week.– Spencer Fry

See things in the present, even if they are in the future.– Larry Ellison

All our dreams can come true, if we have the courage to pursue them.– Walt Disney

If you want to succeed you should strike out on new paths, rather than travel the worn paths of accepted success. — John D. Rockefeller

Go as far as you can see; when you get there, you’ll be able to see further. — JP Morgan

It is critical that we as a country support the principals of free enterprise and entrepreneurship, the largest breaks on the system is the government and all the regulation it has created. Regulations are typically there to help “protect the people”; but all too often these same regulations impede progress and development of new products which can help people even more. How do regulations slow the progress of your business?
0 Comments Click here to read/write comments