The Sour Fruits of Regulations

At times you come across an article that really makes sense. I have over the years discussed the issues of how we have too many regulations in many areas of our lives. In deed a book has been written about how every day we are breaking the laws of the land simply because there are so many we don’t know that we are breaking the law. 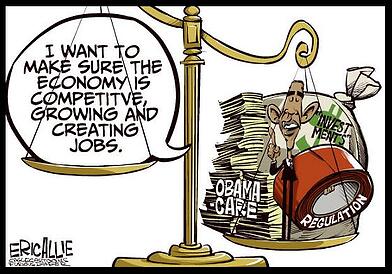 Many of these regulations/laws have unintended consequences that in the long run cost us as a nation far more than we thought. It seems that Congress is always in a mode of trying to fix things. And their fixes often make things worse, thus requiring another fix! It would be nice if congress only meet for a year every four years, that way the dust could settle and people could have time to learn about the laws that were passed and the economy could have the time to absorb the laws.

The current situation of you have to pass the law in order to read what is in the law, in reference to ObamaCare, is not healthy for anyone. That is like buying a plane ticket without knowing what the destination is going to be or if they will return you to the city where you started! The lack of really understanding the law and what is in it for America, is now coming to haunt us with its many unintended consequences. Stomachs are turning, like what happens after eating sour fruit!

Recently I read an article on the Wall Street Journal’s website Market Watch, by Scott W. Atlas, MD, a professor at Stanford University, he was kind enough to let me share it with you my readers. I know it is a bit long for what I normally publish, but this is worth the read, because in the end it truly affects all of us.

The US Treasury Department is currently working on new regulations to keep companies from leaving the United States, so they pay taxes here instead of other countries where taxes are lower. This is very Stalinistic or you could say, “so much for the land of the free!” Communist countries don’t let their people or companies leave their countries freely, and now it appears that we are following suit, pretty scary if you ask me.

This is simply a free market move, just as you purchase products from other countries because they can manufacture or produce some good or service less expensive, taxes are a business expense and there comes a point that businesses can’t afford to keep passing these expenses on to their customers, something has to give.

It seems to me that if we lowered taxes and competed with other countries we would get more companies that wanted to locate here in the United States, which in return would raise more taxes. But forcing companies to stay here is removing our rights as a people to participate in the free market system. Read on and please offer your opinions in the comments section.

Of the many unintended consequences of the Affordable Care Act, perhaps the least noticed is its threat to innovation. Although most discussions center on the law's more immediate effects on hiring, insurance rates and access to doctors and care, attention should also be paid to its impact on U.S. research and development and health-care technology.

The overwhelming majority of the world's health-care innovation occurs in the U.S. This includes ground-breaking drug treatments, surgical procedures, medical devices, patents, diagnostics and much more. Most of the funding for that innovation—about 71% of U.S. R&D investment—comes from private industry. A recent R&D Magazine survey of industry leaders in 63 countries ranked the U.S. No. 1 in the world for health-care innovation.

But that environment is changing. According to R&D Magazine and the research firm Battelle, growth of R&D spending in the U.S. from 2012 to 2014 averaged just 2.1%, down from an average of 6% over the previous 15 years. In that same 15-year period, Malaysia, Thailand, Singapore, South Korea, India and the European Union saw faster R&D spending growth than the U.S. China's grew on average 22% per year.

The recent slowdown in R&D spending in the U.S. is in part caused by weak economic growth since the 2008 financial crisis. But the economy's weakness itself has been exacerbated by the negative impact of new taxes and regulations under ObamaCare. According to Congressional Budget Office estimates, the new health-care law will levy more than $500 billion in new taxes over its first 10 years to help pay for insurance subsidies and Medicaid expansion. These new taxes include significant levies on key health-care industries, such as manufacturers of medical devices and drugs, and their investors.

As a result, small and large U.S. health-care technology companies are moving R&D centers and jobs overseas. The CEO of one of the largest health-care companies in America recently told me that the device tax his company paid last year exceeded his company's entire R&D budget. Already a long list of companies—including Boston Scientific , Stryker and Cook Medical—have announced job cuts and plans to open new centers for R&D, manufacturing and clinical trials overseas.

The bureaucrats at the Food and Drug Administration are also hindering medical-technology and drug development. According to a 2010 survey of more than 200 medical-device companies by medical professor and entrepreneur Josh Makower and his colleagues at Stanford University, delays of approvals for new medical devices are now far longer in the U.S. than in many other developed countries. In the European Union—not exactly known for cutting through red tape—it takes on average seven months to gain approval for low- to moderate-risk devices. In the U.S., FDA approval for similar devices takes on average 31 months.

The 2011 PricewaterhouseCoopers Medical Technology Innovation Scorecard found that "the gap between innovation leaders and emerging economies is rapidly narrowing." And that "although the United States will hold its lead, the country will continue to lose ground during the next decade." It goes on to say that "China, India, and Brazil will experience the strongest gains during the next 10 years."
Since the signing of the Affordable Care Act in 2010, private-equity investment in new U.S. health-care startups has also diminished. Annual capital investment has decreased to $41 billion in 2013 from $61 billion in 2011, according to quarterly reports by the accounting and audit firm McGladrey LLP. Similarly, the Silicon Valley-based law firm Wilson Sonsini Goodrich & Rosati reported in its semiannual Life Sciences Reports decreases from the first half of 2010 through the second half of 2013 in deal closings and capital raised for startups in biopharmaceuticals, medical devices and equipment, and diagnostics, with only a slight uptick in health-information systems investment.

Meanwhile, many of the best and brightest who come to the U.S. to study science, technology, engineering and math—the STEM subjects that are so crucial to innovation—are choosing to return to their home countries upon graduation. In 2008, a survey conducted by Vivek Wadhwa and his team of researchers at Duke, Harvard and the University of California found that only 6% of Indian, 10% of Chinese and 15% of European students expected to make America their permanent home. Much of this is Congress's fault. Lawmakers have been slow to increase limits on H-1B visas for high-skill foreign workers. Pressure has been brought to bear on Congress to take action, but it may be too late for an increase in the visas to have much effect in health care, given the decline in R&D spending that would make use of their talents.
What can be done to reverse these damaging trends? First, strip back the heavy tax burdens that currently inhibit innovation, starting with repealing the Affordable Care Act's $29 billion medical-device excise tax and the $80 billion tax on brand-name drugs. Change the tax code to add incentives for investment in early-stage medical technology and life-science companies, as well as for philanthropic gifts to academic institutions that promote tech entrepreneurs.

And finally, simplify processes for new device and drug approvals, so that the FDA becomes a favorable rather than an obstructionist environment for these life-saving and cost-saving discoveries. It's a tall order, especially in today's Washington. But America's health—and wealth—depend on it.

Dr. Atlas, a physician, is a senior fellow at Stanford University's Hoover Institution.