Market forces in the economy help determine the rental rates in every community. Each landlord worries whether the ad they ran to attract a renter, will actually bring one in who will not only pay the rent on time, but take care of the property. And hopefully not burn the place down as one of my tenants did 20 years ago! In any event, I certainly understand the other side too - people want to live the American Dream and own their own property/house/castle! It is hard to make the leap and buy a home, when we are surrounded with economic turbulence and uncertainty. Home ownership requires a higher level of economic stability. 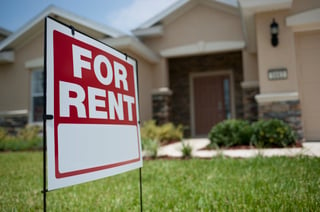 As banks and financial institutions have been mandated to increase their loan qualifications for home mortgages due to government regulations, more and more families are being forced to rent rather than own. As the demand for rentals has been increasing, the level of home ownership has been falling. Some attribute this dynamic to a low inventory of homes on the market, while others blame excessive government requirements imposed on mortgage lenders.

A lack of available rentals along with the increased demand for rentals has propelled rental costs upward. The number of individuals dedicating at least half of their income towards rent hit a record high of 11 million people in 2014, according to the annual State of the Nation’s Housing Report from the Joint Center for Housing Studies.

As rental prices have been rising faster than wages, losing such a large portion of a paycheck to cover housing, means cutting back on essentials such as food, clothing, and health care. This can be draining on young families trying to save for a down payment on a home and then not knowing if they would be able to get approved or not.

Last year saw the biggest surge in new renters in history, according to the report on Housing Studies, bringing the number of people living in rental units to around 110 million people, accounting for about 36% of households. Middle-aged renters made up a substantial portion of the new demand with 40% of renters aged 30-49.

More affluent renters are staying in the rental market longer and driving up the demand for housing.  Traditionally, the wealthy move on to become homeowners, but tight inventory in the housing market is keeping them in rentals longer.

The median rent on a new apartment was $1,381 in 2015, according to the report, which means that a renter would have to make at least $55,000 a year before taxes in order to be able to afford the rent.

It is important to remember also that many people rent for various reasons, they are in work transition, divorce, personal choice, students, newly immigrated. The fact that so many poeple rent is not such an issue as the percent of their income going to pay for rent - that is where the government gets all bent out of shape. According to their model, housing should not cost more than 30% of household income.

When 11 million people pay upwards of 50% of their income for rent, this is going to add fuel to the fire for raising the minimum wage or some sort of rent controls. Either way there will be those in government that think they need to "solve this problem". Landlords: Watch Out!

Owning a home or renting requires effort to budget your income properly. Any time housing costs reaches close to 50% of income things get really tight. As one of my old financial planning professors use to say, “There are only two things you can do, help people cut expenses or help increase cash flow.” In life there are only so many expenses you can cut, and for many people you can only pound so many nails in a day. But generally increasing income provides the greatest opportunity. It is wonderful to see people transition from barely making ends meet to an abundance!

At the beginning of the day its all about possibilities. At the end of the day, it’s all about results.  - Bob Proson
0 Comments Click here to read/write comments