As this week is Thanksgiving, I thought I would write aboutone of our first settlers in America, whose influence on America has been profound. John Smith's impact has been felt both in the American spirit as well as in the American economy. We are all familiar with the story of John Smith being saved by Pocahontas, but this is just one of many examples of his narrow escapes and the influence these experiences gave him in becoming a great leader. 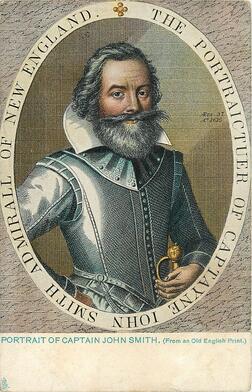 John Smith was born in 1580, near the bottom of the social scale in Willoughby, England. His father was a farmer, which was one level above being a peasant. He was able to attend grammar school in his youth. He had no desire to remain a farmer and even tried to run away when he was 13. His father eventually made him an apprentice to a merchant. He was miserable, and could see little way to break free of the feudal institutions so strongly in place in those days.

After a year or two of being an apprentice, his father died. This bittersweet event allowed John Smith to leave the merchant and pursue the one door open to his ambitious, adventure-craving spirit: the military. During his time in the military, he rose quickly to rank and earned the respect of the men he fought with and for. After a few years, he went home and studied military arts and eventually returned to fight again.

By the time he was in his early twenties, he had fought in many battles, rising to the rank of a captain, and honored by princes and kings for incredible acts of bravery; he had been robbed and beaten and left for dead in the forests of France; he had been thrown overboard a ship, Jonah-like, only to be rescued later by another ship whose captain happened to have friends in common with John Smith and therefore treated him well; he had toured Rome and met the Pope; he had been captured in battle and sold as a slave, and eventually regained his freedom and made it back to England just in time to sail to America.

Clearly John Smith had not only lived a life of adventure, but he had experienced every economic situation that is possible to experience! These experiences laid the foundation for him to be the right man, at the right time, in the right place to give success to the Jamestown settlement.

The bylaws of the Jamestown settlement were set by the financiers of the trip. They put in place a system, not unlike communism, whereby everyone was rationed the same, whether they worked or not. The environment was harsh and untamed. The provisions were meager. Many settlements had tried and failed in the hundred plus years between Columbus and Smith. If Jamestown had maintained these practices, it is probable it would have met with the same fate as so many settlements had previously. But there was something in John Smith that became the catalyst for success in Jamestown!

The settlement was in constant need of replenishing men and supplies from England. The first year saw a 60% casualty rate! The provisions were never enough, which led to a perpetual need to trade with the Indians, which had its own inherent risks!

As John Smith later reflected on those early days, he observed, “Glad was he (who) could slip from his labour, or slumber over his taske he cared not how, nay, the most honest among them would hardly take so much true paines in a weeke, as now for themselves they will do in a day.” He had keen insight into human nature and knew that, even though in theory equal pay sounded good, in practice it was leading to disaster! John Smith finally decided it was time to abandon the bylaws that had been instituted by the financiers of Jamestown. With a musket in hand, John Smith boldly declared that anyone who did not work, would not eat! This basic fundamental economic principle is why I call him the first Economist in America.

The financiers eventually realized the flaw in their bylaws and officially abandoned communism. In its place they allowed the settlers private property rights as well as the ability to live by their own initiative. Something amazing began to happen in Jamestown! All those who eagerly embraced these new laws began to flourish and prosper. They improved their situation so well that word spread back to England and America began to be settled!

When John Smith came to America, he realized the two profound opportunities this land had to offer: Freedom of economic movement and the ideal of liberty! These two principles were the basis for what made America great and were cannonized in the Declaration of Independence and the US Constitution.

“Here (in New England) every man may be master and owner of his owne labour and land; or the greatest part in a small time. If he have nothing but his hands, he may set up his trade; and by industrie quickly grow rich...

“Therefore let all men have as much freedome in reason as may be, and true dealing, for it is the greatest comfort you can give them, where the very name of servitude will breed much ill bloud, and become odious to God and man.”

This vision of what America could become for mankind was indeed the catalyst that allowed America to grow, flourish and prosper! At this Thanksgiving time, let us remember the ideals and visions of those who came before and as we give gratitude for the many blessings we have, let us also promise in our hearts to do our part to maintain their inspired ideals! Happy Thanksgiving!


Sources:
Love and Hate in Jamestown by David A. Price
The Majesty of God's Law by Cleon Skousen
Quotes from:
Description of New England by John Smith
Generall Historie by John Smith

It has been nearly 400 years since the first Thanksgiving was held in Plymouth. I don’t think the pilgrims knew what they were starting – or how the holiday has evolved, perhaps they would not be pleased either. The original idea was for it to be three days of thanksgiving and prayer for our bountiful blessings in this great land. Now it’s a day of amazing feasting and preparation for the biggest shopping day of the year! Maybe someplace in the mix are a few prayers.

Growing up we always had family around, being the youngest of seven kids, my older brothers and sisters with their spouses and kids would get together as often as possible. My father would usually offer a humble heart felt prayer of gratitude for our many blessings. We would eat a meal my mother had prepared and visit, then she would whip some cream and we would eat pumpkin pie and visit some more. After a while folks would begin to head home with feelings of gratitude for a wonderful family and the blessings our Heavenly Father had poured out on us. Today in my own family we try to emulate those thanksgivings of my childhood.

I was saddened when I went shopping the day before for a few last minute things and the clerk tells me that if I still need something I can always come back and get it tomorrow because they will be open. I told the clerk at Walmart that I won’t be back tomorrow, and I felt bad that Walmart would be open on such a day. And that they would take employees away from their families on this holiday. I wished her a good holiday.

It’s too bad that corporations like that, just to get a competitive edge, require employees to work and stay open. Why can’t America just for two days a year (Christmas included) put aside the quest for more and more profits and take a break. Don’t get me wrong, I am all for capitalism and earning a good profit – but at what cost? Early Friday morning I saw in the news of altercations in Walmart stores, where people were videotaping with their phones the craziness of people grabbing discounted products. I had to ask myself WHY? Is a sale item that important that you would trample the person next to you to get the item? If so what have we become as a society? What were our prayers about the day before? That we would get to the sale items first?

In my mind nothing is that important. Period.

Thanksgiving should be about being grateful for the blessings that God has granted us individually and as a people. Gratitude is one of the most important virtues a person can possess and everyone should have it. We, as a people, have so much in life to be grateful for. I am personally grateful for my wife, kids, extended family, friends, clients, our great country, the gospel of Jesus Christ, and so many more things space won't allow to list.

I am reminded of the old Hymn, “When upon life’s billows you are tempest-tossed, When you are discourage thinking all is lost, Count your many blessings; name them one by one, And it will surprise you what the Lord has done.” Counting our blessings can be an eye opening exercise and one worth doing on a regular basis – not just saved for Thanksgiving. When was the last time you counted your many blessings and expressed gratitude for what the Lord has done? The feeling you have is amazing when counting your blessings and recognizing the Lord’s hand in providing each blessing. Count on…
0 Comments Click here to read/write comments