Last week I talked about China and the placement of China’s Yuan in the IMF basket of currencies. This week China is back in the news with it becoming our largest trading partner. Additionally, my good friend Keith Earl, CPA offered a two major income tax issues that tax payers will face this coming year. It is best to get a handle on these issues before they become problems, costing time and money.

China surpassed Canada as America’s biggest trading partner this past quarter as reported by the U.S. Department of 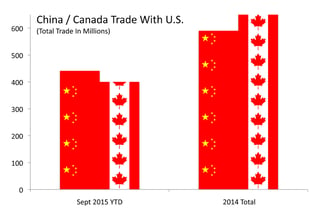 Commerce. Through September 2015, China had more import and export activity with the United States than Canada, the first time to ever occur. Total trade in 2014 with China and Canada was close, but now China has clearly eclipsed Canada as the primary trade partner with the U.S.

As America’s neighbor to the north, Canada and the U.S. share similar languages and customs, that have allowed for an ample trading relationship. The enactment of the North American Free Trade Agreement (NAFTA) in 1994 expanded America’s reach into Canada, as well as Canada’s into the U.S. Even with China’s distance and cultural differences, it has still been able to build and expand its trading relationship with the U.S. to new levels.

Imports from Canada into the U.S. include petroleum and automobiles, while the U.S. is a major exporter of grains and other food products to Canada. The U.S. is an exporter of food and capital products to China, with Chinese imports into the U.S. primarily led by computers and electronic devices. For more info on China's economic growth and the world market see this article: China, Currency and the World Market

I recently attended the tax update provided by my tax software company.  I learned a lot and wanted to share a couple of points to help each tax payer better prepare for the 2015 income tax filing season that begins shortly after the New Year.

Identity Theft: We spent more time than ever before reviewing identity theft and the epidemic it has become related to income taxes.   Identity theft affected just about every tax practitioner office that attended the update. I had tax clients whose identity was compromised. 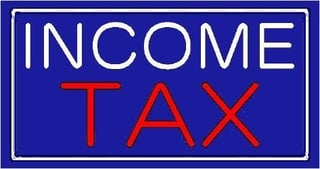 There is an expanding identity theft industry mostly based overseas.  They acquire tax identification numbers from various sources and then prepare and electronically file income tax returns for these taxpayers, generating millions of dollars in refunds before the actual taxpayer is even ready to file their return.

The IRS has made this one of its top priorities to stop this theft and to protect the American taxpayer.  Preparers like myself are doing all we can to prevent it too. In fact we are being tasked with the responsibility to maintain security of the data provided to us by our clients.  Our office is doing all we can to keep all data secure and confidential.

There are some additional things that can be done for any taxpayer who wants to file a form with IRS to request that no electronic return can be filed using your social security number unless an IRS provided pin number is also used.  There are pros and cons for doing this.

The time to get this pin number is NOW before the tax season begins and identity thieves begin filing returns using your number.

The conference discussion leader stated that it is not a question of whether your identity has been stolen.  The only question is how soon a thief will use that identity to create havoc in your life.

There were many errors throughout the system in reporting health care information on 2014 income tax returns.  The instructor shared some statistics and some of the IRS enforcement activities that are associated with this new law and income tax filing requirement.

Some taxpayers who obtained insurance from the online exchange got discounts on their insurance that should have been reported, but for which the taxpayers were unaware and did not correctly report.  Some taxpayers, especially senior taxpayers, may not have even filed a return because the only thing they needed to report was the healthcare subsidy they received.  And they had never had to file this in previous years.  This may be affecting you, your parents, or older relatives.

If you have insurance from an exchange and got assistance with the premium, there is a good possibility that your insurance information was not 100% accurate on your tax return.  The IRS is matching tax returns with insurance policies and will advise insurance companies to take away the discounts that many citizens thought they had knowingly or not.

The result is that some people on the insurance exchange may see their insurance rates go up in a huge way come January 1st.

The people most likely to have this negative experience are senior citizens, such as your parents or grandparents, who got a subsidy, but maybe didn’t even file a return because their income was low enough that they would not have been required to file a tax return.  Because of the Affordable Care Act, they maybe were required to file a return just to report their insurance.

If either of these issues are affecting you or someone you know, we are here to help in any way we can.