The Markets - What's Next?

Following the markets are a challenge pure and simple. It is always interesting to me how people predict the future. In this case it is a prediction based on history; if something is moving in one direction then chances are it will continue for a while in the same direction, with the caveat that it could change direction at any point in time, thus covering the prediction.

The idea of predicting never set well with me so, as an active Boy Scout, my feeling is to simply “Be Prepared”. That seems to be the better road to travel, do all you can to be prepared and let the chips fall where they may. It may be even less stressful to be prepared then to predict.

I remember listening to a stock picker once telling the audience that they only hoped to be right 51% of the time, if so they had a profitable year. I will gladly stick with a core portfolio design, with a little left over for exploring if the client wants to explore a little to try and find the 51%. Hence, the term “core and explore”.

Barbara Kollmeyer did a great job reporting on Goldman’s predictions for next year, so I am presenting her article in full for you to read below. I am interested to see how close Goldman comes next year. It will be a very dicey year, with more of Obamacare coming into full effect, more Dodd Frank being implemented, and other regulations that are geared to choke business a little more. 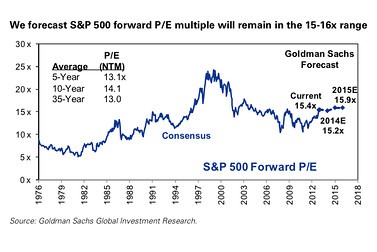 Goldman Sachs has released its its top ten market themes for 2014. It’s calling for U.S. growth to accelerate to 3% and another “solid year” for equities, notably in developed markets, with some caveats of course.

In a separate note released Wednesday, Goldman’s David Kostin and other strategist laid out their S&P 500 SPX +0.31% forecasts for next year, reiterating an end-2014 target of 1,900, a gain of 6% — its fair value estimate. (Note, that’s a little more sunshiny than that 12-month S&P target of 1,840 from Morgan Stanley, aka Bob Marley.)

While multiple expansion was the name of the game for stocks in 2013, next year’s returns will depend on earnings and money flow rather than further valuation re-rating, says Goldman. And valuation is the biggest wildcard. Goldman says its year-end 2014 price target reflects a slight multiple contraction to a p/e of 15.2 forward EPS.

Durability of the expansion matters, says Goldman, and if above-trend growth continues past 2014, the output gap will narrow and the cost of equity will fall, with both trends supporting a higher P/E multiple. Goldman sees forward P/E for the S&P 500 of 16 times, with the index reaching 2,100 by the end of 2015 and 2,200 by the end of 2016.

So where to go with all that? Here is Goldman’s four recommended strategies for next year:
1.     Growth over value. Russell 1000 Growth  RUI -0.36% should beat Russell 1000 Value as slowing earnings growth, falling equity risk premium and higher bond yields will benefit growth.
2.     Firms investing in capital expenditure. Companies that have under-invested in recent years, but have high return on invested capital that Goldman thinks will spend more in 2014 should create a platform for future growth.
3.     Companies with high buyback yields. Goldman’s sector-neutral basket of 50 stocks with the highest share-repurchase yield should benefit as firms return more cash to shareholders.
4.     Stocks with high operating leverage. Economic growth will boost sales and firms with a high degree of operating leverage will benefit most in terms of a lift to EPS.

As for sectors, Goldman is re-shuffling its pro-cyclical sector allocation, recommending overweights in IT, consumer discretionary, industrials vs. underweights in consumer staples, utilities and telecom services. Financials, materials, energy and health care are market weights.