Talk is, that one of the reasons the market is falling right now is because it was overpriced, which may be the case, however another part of the problem has been that when considering options, where else can you put your money?

Banks aren’t much of an option – at the continuously low rates it makes it pretty painful to leave money there. At least when rates were higher and a depositor could get 4%-6% at a bank you had a fairly good risk free option. Too much cash on the sidelines will certainly cause the market to be bid up. Maybe it’s an issue of supply and demand – there aren’t enough shares to go around, so the prices get bid up. 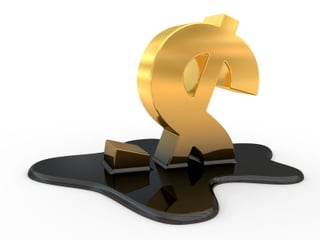 Insurance companies, which are very long-term investors, are currently running about 2-4X or more the rate banks are offering. These rates are certainly going to help folks get better returns, with little to no risk. But when chasing performance even those stable rates don’t appeal to everyone. So this week I thought we would look at one reason why the market has tanked over the past several weeks, and consider the option of putting more money in the market – after many of the stocks and bonds are clearly on sale!

Below is a look at why the markets are falling, what is up with bonds, and a check on precious metals.

Why Stocks Went Down When Oil Went Down – Domestic Equities

Equity markets descended in January alongside oil prices, while testing new lows with a visible increase in volatility. Oil’s dramatic price drop has been a catalyst for stock prices heading lower, a so-called correlation that has actually existed for years.

There are various theories as to how oil and stock prices might be correlated, yet one of the most accepted revolves around macro economic global dynamics.

Oil is the most traded and actively utilized commodity in the world whose consumption represents the economic activity worldwide. So when oil supplies grow and demand drops, markets interpret that as an economic slowdown. Such a slowdown thus migrates into the equity markets, where economic activity and growth is essential for expansion and higher equity prices.

Lower oil prices can also be beneficial for certain sectors, such as consumers, transportation and airlines, whose primary expenses are fuel. Economists expect a possible lag effect with recent low oil prices, which may eventually appear on corporate income statements. Obviously, lower oil prices are not conducive to oil industry sector companies, whose margins shrink as oil prices drop.

Some fixed income investors now view U.S. energy stocks as opportunities to earn higher yields on dividends compared to where they were months ago. Lower valuations on energy stocks have led to higher stock dividend yields as prices have fallen.

Does this mean that the markets won’t recover until oil prices go up? For that answer only time will tell…

The Fed is now at odds with nearly every other developed country central bank as others employ a rate decrease and stimulus strategies.

International rates fell in January as central banks moved forward with stimulus efforts aided by lower borrowing rates. The ECB and Japan both reduced their key lending rates enough to drive markets in both regions towards risk assets. Japan’s central bank surprised markets by lowering one of its main lending rates into negative territory for the first time in order to stimulate its sagging economy.

Gold and Silver - What's Up?

Considering the markets and the downward trend, it seems that Gold and Silver (precious metals) have come off the winner over the past couple months. Both gold and silver are up, about 14% and 10% respectively. It makes sense to own some precious metals, but as with any investment how much higher will it go? Typically, people own precious metals as a balance to inflation but it can be a stabilizer to an investment portfolio.

With that news, it looks like for the time being, Gold is floating to the TOP! So does this mean we are at the bottom of the current sell off? No, perhaps but not likely. Does it mean its time to put more money in the market and buy while things are on sale? Maybe. Many of these answers are particularly personal to your current situtation that is why a good comprehensive evaluation is valuable.

"The hardest thing in the world to understand is income tax." - Albert Einstein

There are many theories on creating the best investment portfolio. Here is one that is well balanced, and well suited to surviving the financial fluctuations of these times. It is called the 7Twelve® portfolio. It was first formulated by Craig L. Isrealsen,PhD. an Executive-in-Residence in the Financial Planning Program in the Woodbury School of Business at Utah Valley University. Overall, he has over 25 years of experience in the financial industry.

Some of the benefits and objectives of the 7Twelve® portfolio include being able to produce long-term equity-like results with less volatility than equities. Compared to equities, this approach minimizes the frequency and the magnitude of losses thus delivering a more consistent performance over a rolling 3-year period of time. Maintaining a consistent portfolio with a philosophy of broad diversification will also help investors avoid fads and performance chasing.

When assembling a balanced portfolio often its key elements are equities and fixed income assets. The seven core asset groups with their twelve associated funds are: US equity: large-cap US, mid-cap US, and small-cap US; Non-US equity: Non- US developed, and Non-US emerging market; Real Estate: global real estate; Resources: natural resources, and commodities; US bonds: aggregate US bonds, and inflation protected US bonds (TIPS); Non- US bonds: international bonds; and Cash: US money market.

This arrangement will allocate 8 equity and diversifying funds- which is 65% of the overall portfolio, and 4 fixed income funds- which accounts for 35% of the portfolio. A 65/35 allocation balance will bring together more stability and less risk in a solid combination that, over the long haul, has a proven track record toward steady growth even in volatile times, such as we are experiencing now.

Re-balancing is an important part of the 7Twelve® investment strategy. Re-balancing helps to accomplish the goal of buy low and sell high. As sectors grow some is sold off to bring the portfolio into balance; the other sectors that are performing poorly get some new money to bring them up to the balanced amount. Nearly all sectors take their day in the sunshine, that of being the best performing asset. By keeping the portfolio balanced, each one is ready for their day to shine.

Re-balancing can also be done by simply adding new money to funds to re-create the 8.33% balance; or, if one is in their retirement years to simply withdraw money from the best performers whereby restoring the 8.33% balance.

Let’s face it, we are emotional creatures by nature, and most investors too are emotional about the decisions to buy or sell. Re-balancing is a fantastic tool that may help with the emotional roller coaster. Using systematic guidelines to monitor the portfolio increases the chance for success. Any assistance with the emotionally charged buy/sell decisions that may chip away at an investors overall gains is helpful. Trying to outsmart the market tends to do more harm than good; nobody can beat randomness at any given time. Having a steady plan to follow will help the investor to safely navigate the years it takes to grow their investment.

One of the main challenges of encouraging an investor to build a multi-asset portfolio is that the portfolio will never outperform the best performing individual asset class in any given year. Multi-asset portfolios are steady, not flashy. Nervous investors who are constantly looking over their shoulder may feel the need to chase last year’s best performing asset class and invest some or all of their portfolio into them. However, the winner last year is typically not the winner this year. This type of roller-coaster investing will surely lead to disaster.

Building a diversified portfolio is the only logical investment philosophy—both emotionally and mathematically. The emotional swings caused by chasing the performance of individual asset classes should be obvious, but the mathematics may not be.

The mathematical evidence supporting the wisdom of a steady multi-asset portfolio vs. performance chasing is simply put: asset classes that have huge gains also tend to also have large losses in subsequent years—and the math of gains and losses is NOT equal. For instance, a 50% loss requires a 100% gain to get back to the starting point.

Therefore, avoiding large losses is one of the key reasons for building a broadly diversified portfolio. Individual asset classes have great years (such as US stocks in 2013) but next year may not produce similar results. A steady, well diversified portfolio will win in the end.

The 7Twelve® portfolio recipe for investing has a proven track record and is well worth looking into if you haven't already. Give us a call if you think this portfolio model will help you, and as always, do your own homework before you decide to invest.

7Twelve is a registered Trade Mark by Craig Israelsen and is used by Wendell Brock by a licensing agreement.