During the October, 2007 speech made before the Subcommittee on Oversight and investigations Committee on Financial Services, U.S. House of Representatives, Sandra F Braunstein, The Federal Reserve, Director of Community and Consumer Affairs, stated “that nationally there about 200 minority-owned financial institutions that serve a broad range of communities and populations. The Federal Reserve recognizes the important role that minority-owned banks play in the financial services market through the services they provide to their communities.” 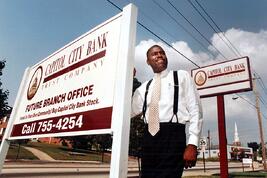 Mergers and acquisitions have taken a toll on minority-owned institutions and despite the development of the Federal Reserve System’s Minority-Owned Institutions (MOI) Program, the total number of designated[1] “Minority-Owned Financial Institutions” has been on the decline. As of December 31, 2013 there were only 174. Many of these institutions provide access to credit and financial services in markets that have historically been underserved and as a group they play a unique and important role that extends beyond their particular markets. They are diverse in terms of their minority ownership (e.g., African American, Native American, Asian, and Hispanic) and the markets they serve.  Some are quite profitable and operate in higher-income markets, while others serve lower-income communities and, in some cases, struggle to achieve earnings commensurate with their peers.  African Americans, Hispanics and Asian Americans have increasingly looked toward financial institutions to help them build wealth, purchase homes, meet everyday needs and plan for the future.

Minority-owned and de novo institutions that remain stable, operate in a safe and sound manner, and grow to a size that allows them to continue providing capital and financial services to a growing population add strength and vitality to the local communities they serve and help provide economic stability to the U.S. economy. Minority banks are important to the communities they serve and vital to many inner cities. Many minority banks also follow a mission to help communities that are challenged with demographic and economic weaknesses. These successful institutions have identified that importance of customers being able to communicate in their own language which is a particular focus of the minority owned Asian banks.  After Spanish, Chinese is the most widely spoken non-English language in the country at about 2.3 million. The languages of Tagalog and Vietnamese are spoken by about 1 million.

The Minority Bank Deposit Program (MBDP) was created as a voluntary program by Executive Order to encourage greater participation by minority and women-owned financial institutions and credit unions serving low-income communities as depositaries and financial agents. In August, 2013, the Board of Governors of the Federal Reserve System reaffirmed their ongoing commitment to preserving the existence of minority depository institutions (MDIs), consistent with statutory mandates, and to highlight the Federal Reserve’s resources available to MDIs. These resources include the Community Development Financial Institutions (CDFI) Fund; Minority Bank Deposit Program; and Minority Business Development Agency.

Today the growth market in banking is being driven in large part by the large influx of the vary people that FIRREA was developed to help. However as the minority–owned banks become successful they become likely candidates for a merger or acquisition often leaving a gap typically in the personal relationships between customer and banker and the services and products offered. Data compiled from the FFIEC website for the most current Peer Group statistics for total Minority-Owned banks as of December 31, 2013 are lead by Asian-Owned banks for a total of 87, followed by Hispanic-Owned banks at 39, African-American-Owned banks at 28, and Native American-Owned banks at 18.

The services and products offered today and in the future must reflect the needs of a younger (GEN Y), more mobile and more ethnic customer base. Although both big banks and small banks are working to find ways to attract these consumers, it has often been the Minority-Owned bank that offers the personalized services and products that this group has been seeking in the past and may be the successful leverage for future Minority-Owned Banks in this country. Ownership and running of Minority-Owned banks will need to grow as these populations grow in the country.

[1] FIRREA defines a “minority depository institution” as any (either privately or publicly owned) where 51 percent or more of the voting stock is owned by one or more socially and economically disadvantaged individuals or in the case of a mutual institution where the majority of the board of directors, account holders, and the community it services is predominantly minority. The term “minority” is stated as any Black American, Native American, Hispanic American or Asian American.